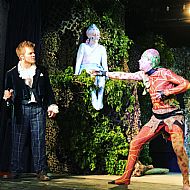 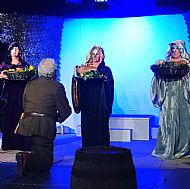 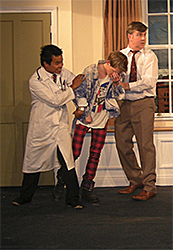 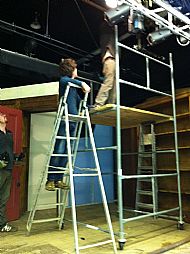 What do we do?

“The aim of The Players is to promote the advancement and development of all aspects of the Art of Drama and to encourage the general public's appreciation of such art through the live performance of comedy, drama and general entertainment. The Players are non-political and non-sectarian.”

If all that sounds a bit stuffy – don’t worry; it’s an extract from the constitution which is intended to occasionally remind us what we are here for.  An important thing to remember is that we do not restrict ourselves to one type of play or any particular style.  We have done comedies, ‘straight’ plays, full length or short one-acters and Shakespeare.  We do not always choose well known plays and take pride in the fact that some of our productions are decidedly off-beat.  However we need to remember our audiences and ensure firstly that they are attracted to turn up, secondly that they are entertained, and thirdly that they will want to come back again!

When do we do it?

The group meets every Thursday at Old Buckenham Village hall at 7.30 p.m.  We are normally in the main hall but once a month move to the smaller Memorial Hall to accommodate the Women’s Institute!  As we move closer to a show – a few weeks before we will tend to meet twice a week on either Mondays or Tuesdays as well.  We also set build and paint for one or two Sundays before production week.  During production week full commitment is expected but if all is going well you may get one night off…

Where do we do it?

As said above we meet in Old Buckenham Village Hall and that is where we put on the productions.  However we do get out and about on occasions.  For many years we took part in the Breckland Drama Festival every May which would be held in different venues in Breckland and South Norfolk.  More recently we entered the Felixstowe Festival and repeated our May production there where we won the award for Best Technical and came third overall with a production of Snake in the Grass by Alan Ayckbourn

The group has about 25-30 paid-up members, some of who are staunchly involved in every show and others dip in and out depending upon other commitments and what is happening in their life at the time.  Pantomime season sees a sudden increase in numbers – I wonder why…  We are truly a diverse group with members from all sorts of different backgrounds and of all ages from 16 to older than some will admit to.  Surprisingly, most of our members do not actually live in Old Buckenham although we all have links here and are fond of the village.

We do have a set pattern over the year mainly due to the hall availability.  Old Buckenham is a thriving village with a shop, school and many active clubs and societies so it is not surprising that the village hall is in great demand.  We normally try to do three shows a year in January, May and September.  January is pantomime time, or a seasonal play of some description; in May we aim to do a full length play, either a comedy or drama, and in September we try to put on something a bit more relaxed such as a couple of one-act plays with some music or entertainment  in an informal setting with some simple food or nibbles.  The pantomime runs for three nights plus a Saturday matinee, the May show is also three nights and in September we just use the Friday and Saturday.

I only want to help backstage - is that OK?

Of course it is.  OBP does not have a team of people who only do backstage with the actors just turning up and doing their thing.   However several of our group came along saying they only wanted to help backstage and are now regulars at treading the boards.   We have a culture of everyone helping where they can for one or maybe two Sundays before the show and a lot of the group come along the Sunday morning afterwards to help clear up and strike the set.  Please don’t be put off though if you do have regular Sunday commitments: the point is that we all try to muck in and help where we can.

Do I need experience?

No - just enthusiasm, commitment and a readiness to learn from the Director and others around you.  We are an amateur group but we do aim not to be amateurish and to provide a quality experience for our audiences who pay to see us.

So what about the boring stuff?

We do have a constitution which sets out how we operate and a very general structure for the group.  We have a committee which meets every couple of months to keep us on track and deal with the more mundane aspects of the Players such as finances, general administration (and village hall politics).

As you might expect we have lots of costs, many of which we cannot recoup just from productions so we do have a yearly subscription charge.  Annual subscription is currently £36 per annum or £18.00 for students and unwaged.  There is no charge for under 16s although we are unable to accommodate young members unless part of a specific show due to the stringent requirements around child safeguarding.  We have an Annual General Meeting in November where we elect the committee and review the year.